This was written by my 13 year old here is the link to her blog post https://juniorschooldropout.blogspot.com/2021/04/fairy-rings.html

Last year we came across a fairy ring, at first I didn't know what it was but nana do so she told me, we took a picture of it but we forgot about it, today we found where it was and remembered, when I got home I read up on it and here is some folklore as well as the photo we took:home 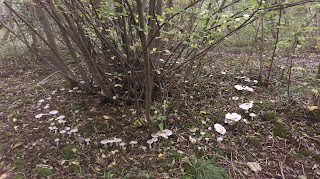 A fairy ring also known as elf circles is a naturally occurring ring or arc of mushrooms.They are found mainly in forested areas,but also appear in grasslands.The best time of year to see them is late summer to early autumn

Fairy rings are the subject of much folklore worldwide, particularly in Western Europe. They are often seen as hazardous or dangerous places, and linked with witches or the Devil in folklore.
Different countries across Europe have their own folklore tales about fairy rings. In English and Celtic folklore, fairy rings were caused by fairies or elves dancing in a circle. It was said that if humans joined in the dance they would be punished by the fairies, and made to dance in the ring until they passed out from exhaustion. (Bit extreme I think)
German folklore is a bit harsher as fairy rings were actually known as witches’ rings. And that witches would dance around them on the main spring solstice Ostara.
Mini Blue Hunter’s Full Moon?
Author: Jess
Topics